Why Did You Leave Britain? 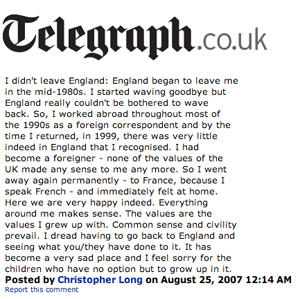 I didn't leave England: England began to leave me in the mid-1980s. I started waving goodbye but England really couldn't be bothered to wave back.

So, I worked abroad throughout most of the 1990s as a foreign correspondent and by the time I returned, in 1999, there was very little indeed in England that I recognised. I had become a foreigner - none of the values of the UK made any sense to me any more.

So I went away again permanently - to France, because I speak French - and immediately felt at home. Here we are very happy indeed. Everything around me makes sense. The values are the values I grew up with. Common sense and civility prevail.

I dread having to go back to England and seeing what you/they have done to it. It has become a very sad place and I feel sorry for the children who have no option but to grow up in it.

© (2007) Christopher Long. Copyright, Syndication & All Rights Reserved Worldwide.
The text and graphical content of this and linked documents are the copyright of their author and or creator and site designer, Christopher Long, unless otherwise stated. No publication, reproduction or exploitation of this material may be made in any form prior to clear written agreement of terms with the author or his agents.