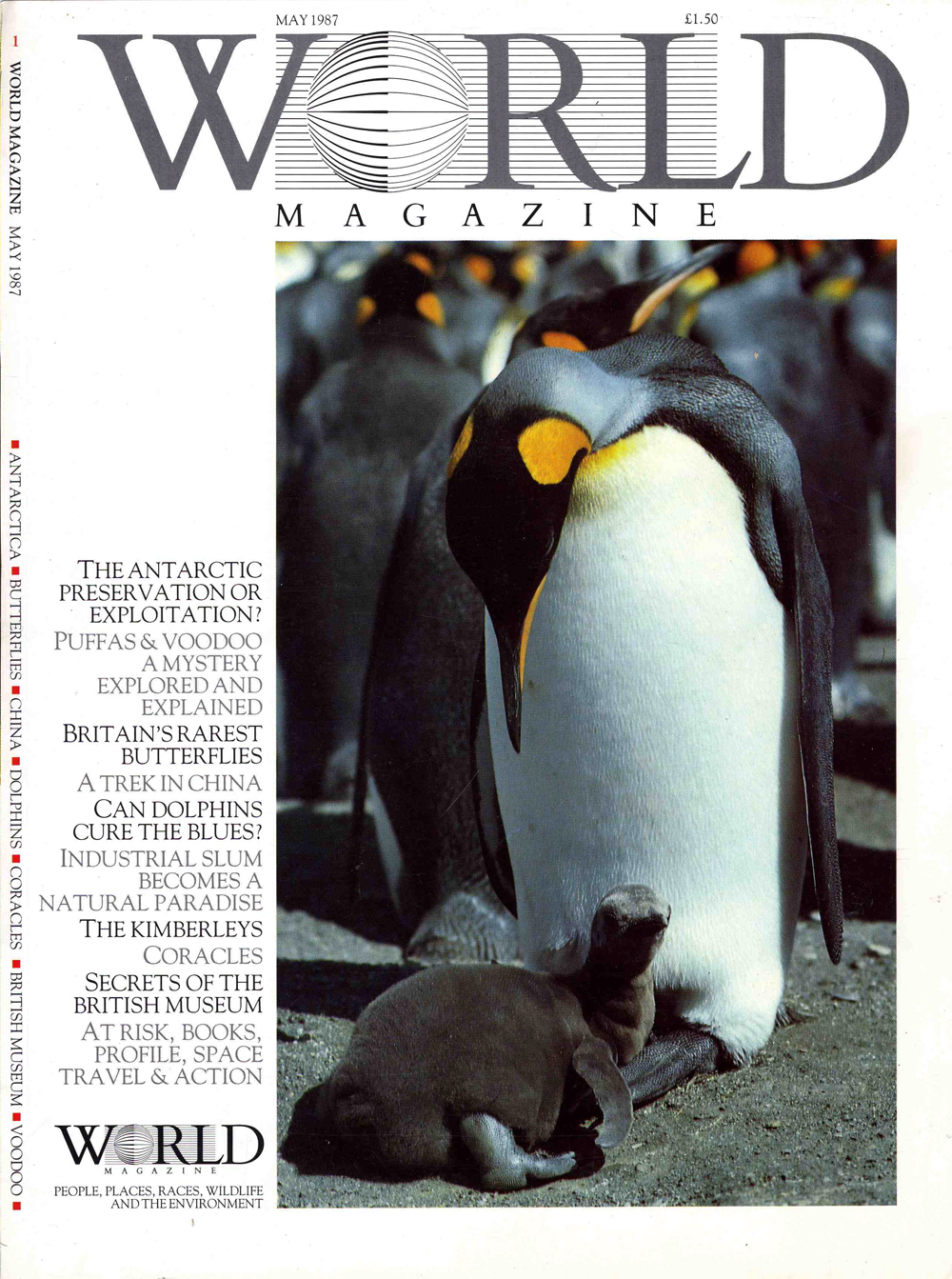 The launch of World Magazine... and this is the page that most editors reserve for themselves each issue. As time presses in on them and the editorial and production pressures increase, they usually wish they hadn't been quite so self-indulgent...

When I was a school-boy in 1957 the high point of each week was the two hours of television we were allowed on Saturdays. Television was then a novelty in Britain and more than two hours would, apparently, have ruined our eyes.

What we chose to watch was thus a tough decision. But, against stiff competition from A Tale Of Two Cities, Mr Pastry, The Voice and the Six-Five Special, we settled for Armand & Michaela Dennis who took us each weekend to the game reserves of Kenya. From behind a primitive camera they produced blurred images of dangerous lions, charging bull elephants and fierce-looking African warriors.

Each week they would stress the risks they were taking to bring us this epic footage from what was then still the British Empire. We were awed by their courage, knowledge and skill and we secretly longed to see them come to a bloody, unblurred black-and-white death before our very eyes.

Today it doesn't sound remarkable but then it was the only chance most people had to see a tiger outside a zoo and the nearest most people ever got to going abroad at all.

So, when Hans Hass took us underwater with his camera to show us the mysteries of the ocean depths we were understandably still more impressed.

The year of 1957 was action-packed because that was when the Russians launched the first Sputnik into space, hotly pursued by Little Lemon, the doomed dog destined forever to orbit the earth as the bleep-bleep of the first satellites were broadcast on radio and television to announce the arrival of the Space Age.

By 1967, just ten years later, everything had changed. Nearly everyone had television and no one was impressed merely by the sight of foreign lands, 'dangerous' wild animals, bleeps from outer space or the incredible size of a Conga Eel.

Out of the lush prosperity of the Sixties came colour television for all and the chance to fly all over the world and see things for oneself. People could scuba-dive and be Hans Hass or join exhibitions and become Armand & Michaela Dennis.

In the Fifties the world had come to us, in black and white. In the Sixties we were starting to go out en masse to meet a colourful world. Instead of derring-do people wanted to understand what they were seeing. How did it all fit into the system we christened 'ecology' and just how or why might we damage, maintain or improve the intricate and fascinating world now so accessible to us?

We needed a new breed of presenter and new presentation. It was time for David Attenborough to step forward and for David Bellamy to join him. It was time for the superb BBC Natural History Unit in Bristol to lead the world with a huge range of programmes which explained the world's myriad mysteries and marvels by combining science, travel, anthropology, natural history, astronomy and geology in an irresistibly attractive and imaginative style.

But television and radio are illusory and eminently forgettable media. One can't easily go back to linger on an item, dwell on an explanation or savour an image. A more permanent record was needed – perhaps in the form of a magazine. During the Eighties many such magazines did appear in mainland Europe.

But not, strangely enough, here in Britain – until, that is, the arrival of World Magazine.

So, in May 1987, it's 30 years since Armand, Michaela, Hans and Little Lemon first mapped new horizons for us throughout the world, under the sea and in outer space. It's 20 years since we learnt to try and understand it. It's 10 years since a magazine first appeared in Europe to record it all and satisfy a readership of millions per month.

Now, for the first time, Britain is to get its own magazine devoted to bringing people, places, races, wildlife and the environment into proportion, with a global perspective.

In May 1987 we hope very much that you will find World Magazine as challenging, exciting and rewarding as we here have found the experience of putting it together.

The following was the Editorial published in the pre-launch dummy issue (dated May 1987) for the press and advertisers: 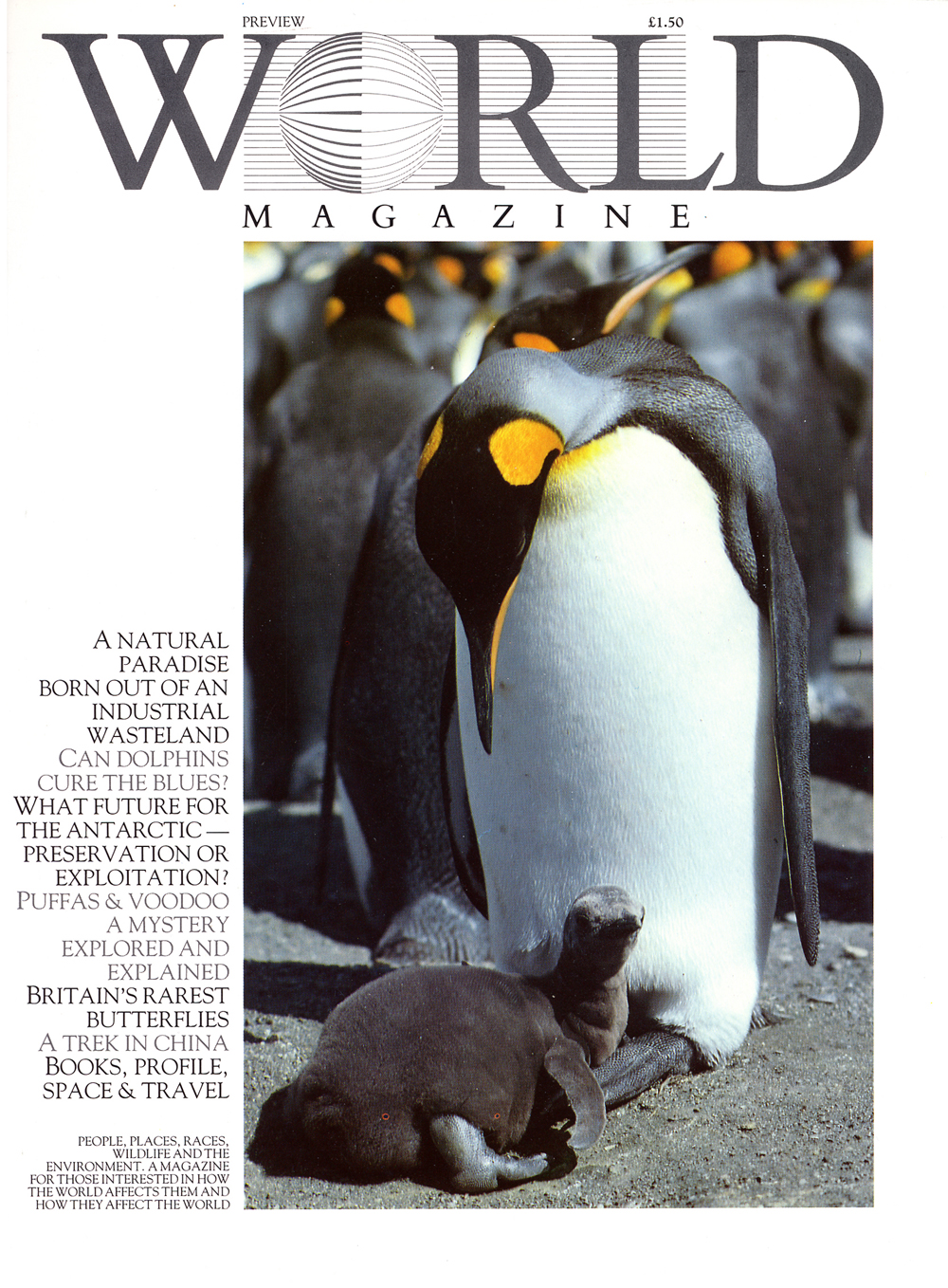 Surrounded by spectacular mammals and in the company of over one hundred special guests, World Magazine was officially launched at the Natural History Museum in London.

The first British magazine devoted to people, places, races, wildlife and the environment has at long last provided opportunities for dozens of our most excellent naturalists, photographers and specialist writers.

Some of these appear in this first issue of World Magazine – notably Gareth Huw Davies whose article on the future of Antarctica discusses the greatest challenge ever to face conservationists and the health of the planet.

About a third of World Magazine will be devoted to regular columns on space, wildlife at risk, books, the sea, travel, profiles, capital cities and unusually adventurous leisure activities. However, the remaining two-thirds are devoted to major features.

Non-political and non-partisan, we hope nevertheless that they will always be fearless, factual, fair and fascinating and that this month's items on Dolphins, Butterflies, Wigan, China and the Hidden Nine-Tenths will be an exciting foretaste of things to come.

© (1987) Christopher Long. Copyright, Syndication & All Rights Reserved Worldwide.
The text and graphical content of this and linked documents are the copyright of their author and or creator and site designer, Christopher Long, unless otherwise stated. No publication, reproduction or exploitation of this material may be made in any form prior to clear written agreement of terms with the author or his agents.