Voyage Across The Indian Ocean

In 1970 Patricia June Reinsma made a remarkable crossing of the Indian Ocean from Darwin (Australia) to Durban (South Africa) in a 34 ft. catamaran 'Nine Tails'. The voyage included stops at the islands of Bali, Reunion and Mauritius and led to a BBC Radio 'Start the Week' broadcast on a dilemma she faced: how to survive aboard a very small craft when she and her skipper/companion no longer spoke to each other and all communication had broken down...? Here the local press in South Africa and England merely recorded the platitudes! 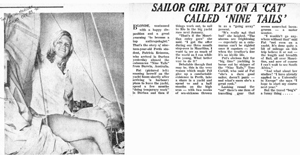 Blonde, suntanned with a happy disposition and a great yearning "to become a top anthropologist". That's the story of nineteen-year-old Perth student, Patricia Reinsma, who arrived in Durban yesterday aboard the catamaran "Nine Tails" from Darwin, Australia.

Pat (pictured left: sunning herself on the yacht boom shortly after arriving in harbour) plans to leave the yacht, spend a few months "doing temporary work" in Durban and then if things work out, sail to Rio in the big yacht race next January.

"That's if the Mauritian entry goes," she said. "I got the offer during our three month stop-over in Mauritius. I want to see as much of the world as I can while I'm young. What better way to do it."

Debatable though that may be, this is the very reason which made Pat give up a comfortable existence in Perth, take a share in a yacht and spend five and a half months on the high seas – with two weeks of sea-sickness thrown in as a "going away" present.

"It's really not that bad," she laughed. "The storms are frightening – especially as a catamaran can't be righted once it capsizes – but when the weather's fine it's an idyllic life."

Pat's obvious flair for "big time" yachting is borne out by skipper of the "Nine Tails", Tom Corkill, who said of Pat "she's a darn good sailor, doesn't panic – and what's more she's a great cook."

Looking round the "cat" there's one item of travelling gear that seems somewhat incongruous – a motor scooter.

"I wouldn't go anywhere without that," said Pat, "not even on a yacht. It's done quite a bit of mileage on this trip, believe it or not – the length and breadth of Bali, all over Mauritius, and now of course I can't wait to see South Africa."

And what about her studies? "I have already applied to a University in Europe," she says. "I hope to start my course next year."

Back in Westerham – 19-year-old Australian-born Patricia Reinsma and 22-year-old Christopher Long. The couple are staying at Christopher's parents' home at Courtlands, Westerham Hill. They met in Durban, South Africa, after Patricia had completed a five-month journey across the Indian Ocean in a catamaran. The two travellers now hope to set out on a new travel venture, but have not yet decided the destination.

Patricia Reinsma, a 19-year-old Australian girl has just arrived in Westerham after a fantastic adventure that took her more than 7,000 miles across the Indian Ocean in a catamaran.

With her is Christopher Long, aged 22, who has brought her to his parents' home at Courtlands, Westerham Hill. The couple met in Durban, South Africa on the day that Patricia sailed in on board the 34-foot craft after her hazardous five month journey.

They spent a few weeks touring the country, before arriving in England earlier this month.

Patricia began her journey in Darwin in May, when she and a young friend, Tom Corkill, set sail in the catamaran with only the most essential equipment.

They had no radio, only one set of sails, the minimum number of charts, and only a plastic sextant. For Patricia, then only 18 years old, this was her first ocean voyage although her partner had done this sort of thing for eight years.

From Darwin they sailed through the Indonesian islands to Bali and Mauritius where they picked up two more passengers and from there to the island of Réunion and on to Durban.

The journey was full of hazards which included running out of water, losing a rudder and riding out a ferocious storm that capsized a tanker and wrecked much of the town of East London on the east coast of South Africa.

"This was one of the worst storms they have ever known," said Patricia. "The longest time we went without touching land was 23 days, from Bali to Mauritius."

The frail craft, Nine Tails, was also attacked by a school of porpoises which had to be driven off with a rifle.

She met Christopher at a barbecue on the first night she was in Durban. After seeing various parts of the country they had to leave because the South African government would not let her stay longer than three weeks.

Christopher went to South Africa about a year ago. "I went there to work and to see as much as I could of what was going on in that country – things you don't normally read in the press," he said.

He travelled all over the country working in such remote places as the Kalahari Desert.

The couple have a great deal in common. "We believe in not taking life as it comes but going out and grabbing it," said Patricia.

Patricia and Christopher would very much like to go out to other remote places, possibly South America or North Africa, but this depends on how much money they can save. For the moment Christopher says: "It's wonderful to be back".

To raise some of the money, they want to write a series of articles on their adventures for some magazine or paper, and also want to give talks to anyone who wants to hear about them.

Above: Patricia Reinsma on the island of Reunion in the Indian Ocean in 1970, shortly before she sailed on to Durban, South Africa. 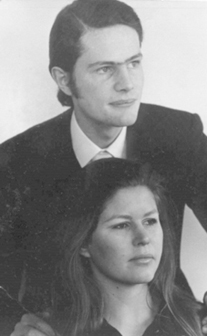 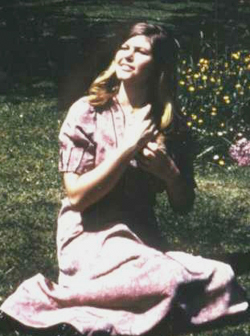 Above left: Patricia Reinsma at Westerham, England, in 1971, after recovering from the rigours of her voyage from Darwin (Australia) to Durban (South Africa) in a 34 ft catamaran.
Above right: The author and Patricia Reinsma shortly before their marriage in April 1973.

© (1970) Christopher Long. Copyright, Syndication & All Rights Reserved Worldwide.
The text and graphical content of this and linked documents are the copyright of their author and or creator and site designer, Christopher Long, unless otherwise stated. No publication, reproduction or exploitation of this material may be made in any form prior to clear written agreement of terms with the author or his agents.