Helping Barn Owls to establish themselves on a small farm in Normandy.

ne of the most satisfying projects at Le Bosquet has been encouraging Barn Owls to become permanent breeding residents.

In August 2008, with help from owl expert Thierry Lefèvre (a member of GONm, the Groupe Ornithologique Normand) we set up two owl boxes in the windward gable end of an old cottage, about 4 metres off the ground and about 100 metres from human habitation.
In 2009 a pair of jackdaws became squatters for a season and in 2010 not much happened there at all. 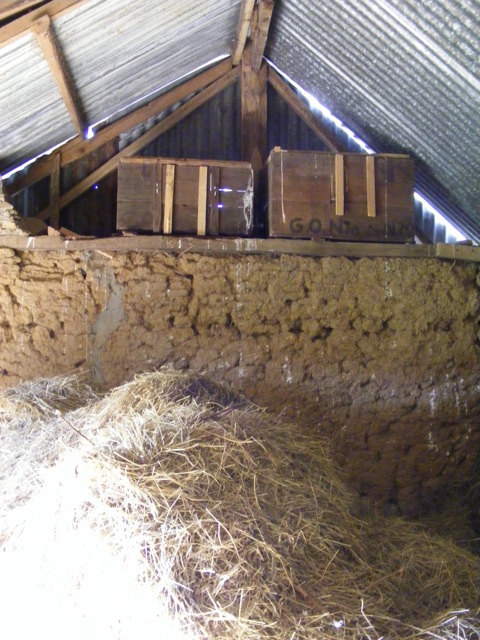 But in 2011 four owlets were hatched and successfully flew the nest – having been officially ringed by experts from GONm. Of these four youngsters, two had a reddish tinge to their breast plumage while the others were much more white.
This apparently indicates that Barn Owls from Britain had successfully mated with native French owls. Sadly, one of these four was later found dead at the foot of a nearby hedge.
The remaining three juveniles stayed with us for several weeks as their parents continued feeding them until the autumn. Then, if they followed the usual pattern, they would have flown as far as 80km away, in search of new territories and opportunities to breed.
Meanwhile, in 2012, at least another four owlets flew the nest (probably hatched by the same pair as the year before) and it seems likely that they in fact produced two broods in quick succession that year – using just one of the two adjacent boxes.
Laying two clutches of eggs in a single season is common among many birds, owls included. But counting the fledglings is not easy since we prefer not to interfere with the nest boxes in any way during the breeding season.
Nevertheless, for a while in late summer evenings, when we went out to shut up the chickens, numerous youngsters were just visible sitting on fence posts all around their previous nursery and loudly calling for their parents to feed them.
In December of 2012 we supplied almost fifty 'pellets' from these parent owls to François Leboulenger (Groupe mammalogique normand) who was able to analyse them.
These pellets consist of indigestible regurgitated balls of fur and bone – all that remains of the small nocturnal animals (mostly rodents) that make up the vast majority of the owls' diet.
The results of this analysis are interesting since they give a reading of the health and diversity of the species that form the owls' prey, as well as offering an overview of the general 'health' and characteristics of the landscape over which they hunt.
See here for a brief summary.François Leboulenger's analysis shows that although Le Bosquet/Le Boquet might be considered to be typical 'bocage' land, the lack of certain insectivores and small mammals/rodents in the owls' diet suggest they have been hunting over land more typical of intensive cereal crop production. This in turn is a measure of the degraded nature of the 'bocage' surrounding Le Bosquet. [Vast fields of maize, wheat and barley have progressively taken over from small mixed culture fields and pastureland.]

François Leboulenger's findings show that our owls are eating ten different sorts of small mammals and among these the Water Shrew (Musaraigne aquatique) which indicates that our owls are hunting along our stream.
He says the results are curious and unexpected and further analysis of pellets at this location (and in the Bocage Virois generally) is recommended.

In 2012 we were again generously helped by Thierry Lefèvre who placed another two Barn Owl boxes in the roof space of our abandoned C16th house at Le Boquet.
These two boxes are less than 200m from the first two which means that any future occupants may be competing for territory. However, the natural territory of an owl is about 1.5km in diameter and so we can only hope they'll carve up the available landscape between them in future.
One of the 2012 boxes uses a ventilation hole in the masonry of the wall while the other required us to cut a hole about 13cm x 8cm in the timber cladding of a hay-loft.

Note in June 2019: Since starting our owl regeneration project in 2008, a number of friends nearby have joined in. These include Timur D'Vatz (1km away), the de Lautour and Hollis families (2km away), the King and Adams families (4km away) and others still further afield.

This means that in most years there is now a very healthy number of young owls competing for territories in the area (Pont-Farcy, Gouvets, Pleines-Oevres, Fourneaux and Saint-Vigor-des-Monts) and that many youngsters must be moving away into neighbouring areas in order to survive and reproduce.

Some idea of the numbers involved can be gathered from this nesting report which suggests that despite occasional 'bad' years and the predations of the dreaded 'fouine' (stone marten), the whole exercise has been a great success.

When studying reports such as this it needs to be remembered that we are seeing the results of just one clutch of eggs each year. Owls normally lay two clutches each summer and the annual census visit only records one of these.

© (2012) Christopher A. Long. Copyright, Syndication & All Rights Reserved Worldwide.
The text and graphical content of this and linked documents are the copyright of their author and or creator and site designer, Christopher Long, unless otherwise stated.
No publication, reproduction or exploitation of this material may be made in any form prior to clear written agreement of terms with the author or his agents.